«  […] It may seem inappropriate to still be interested in the utopias at a time where it would rather be fair to announce, as a relief, the end of illusions in a world, our world, globalised and screwed, among other things, by a capitalistic economy supported by an image stripped of its ever disconcerting reality (...). In this issue, it is not about denouncing, opposing, or even adhering to the real, but instead to see how researcher, artists, and, more broadly, art reorient this real. To reorient the real is in one way to rearrange our everyday natures, our modes of production, as much economic as social. It is time to find angles that decompartmentalise our Westerness as much as it is necessary to find connections that liberate and activate our Orientalness. Just as it is about an inopportune gaiety, this new publication of Checkpoint journal, entitled “Dreaming,” aims to be an anchoring point in current artistic practices which broach the question not so much of finding new forms but of finding new oxygen.[…] » Djamel Kokene (Alger, Le Caire, Paris, 2008) 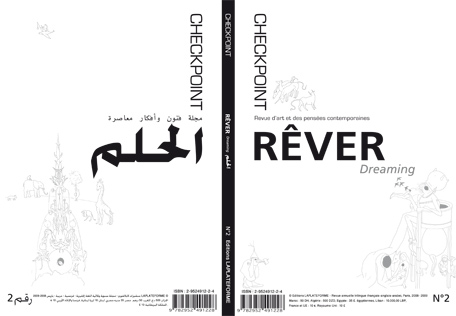