Issuenumber one _
« […] Redeal. […] In this context, what can be the motivation for artists coming from Arab and/or European societies to create their own representations of the world? It is far from being about “making” a sign or a form “one’s own”, make one self the owner; it is about making interfere modes of production and modes of diffusing through use and “reuse” as much in the political and institutional space as in the social space. In this context “re” is as much an economic and geopolitical figure as a social figure. And those who see in the “re” a simple fashion is today afraid of using the image of the Arabian, itself having become fashionable. And who can today claim possessing the monopole of sense in a context of proliferation of uses coming from more and more sources?  » 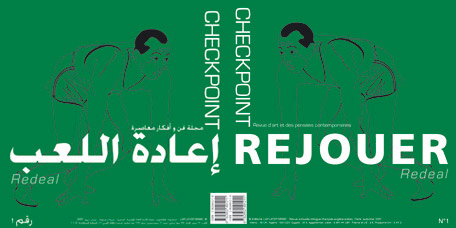